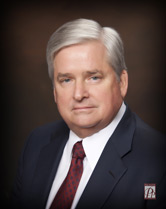 Mr. Mills founded The Mills Law Firm, LLP in 1998.  During his distinguished career, he has focused his practice on civil litigation involving medical malpractice, products liability, school law, municipal law and general negligence.  Mr. Mills has tried more than 300 cases to verdict over a 40-year career as a trial lawyer. He has lectured at numerous bar association seminars on topics of trial practice, technique, skills and medical malpractice litigation.

He is admitted to practice in all New York State Courts, the United States Supreme Court, the Second Circuit Court of Appeals and the U.S. District Courts of the Northern and Southern Districts.

Mr. Mills received his B.S. from Union College in 1970, and he received his J.D. from Albany Law School in 1975.  Mr. Mills served in the United States Army Reserves from 1970 to 1976.  He is a member of the Saratoga County, Albany County and New York State (Member, Committee on Municipal Law; Sections on Insurance Negligence and Compensation; Trial Lawyers) and American (Member, Sections on Tort and Insurance Practices) Bar Associations.  He is also a member of the American Association of Justice, the Defense Research Institute and Trial Lawyer’s Association as well as the Capital District Trial Lawyers Association.