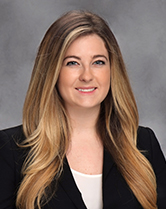 Ms. Kulak is an associate at the Firm. Her practice is limited to representing clients in the field of personal injury and commercial litigation, with a focus on school and municipal law, medical malpractice, contract law, and general negligence. Ms. Kulak also has experience in appellate practice and has argued in the Appellate Division of the New York Supreme Court. Ms. Kulak is admitted into practice in all New York State Courts. She is also an active member of the Albany County, Saratoga County, and New York State Bar Associations, as well as the Capital District Trial Lawyers Association.

Prior to entering into practice Ms. Kulak received her B.A. from Iowa State University in 2011, and her J.D. from Syracuse University College of Law, where she graduated cum laude, in 2014. While at Syracuse University College of Law she was a recipient of the L. Frederick F. Goldie Publication Award, and a member of the Justinian Honorary Law Society. During law school, Ms. Kulak also served as a judicial intern to the Honorable Mae A. D’Agostino of the Federal District Court in the Northern District of New York. She also served as a Board Member of the Journal for International Law and Commerce, where she published the article “The Answer is in the Evidence: Plain Packaging, Graphic Health Warnings, and the Family Smoking Prevention and Tobacco Control Act.”